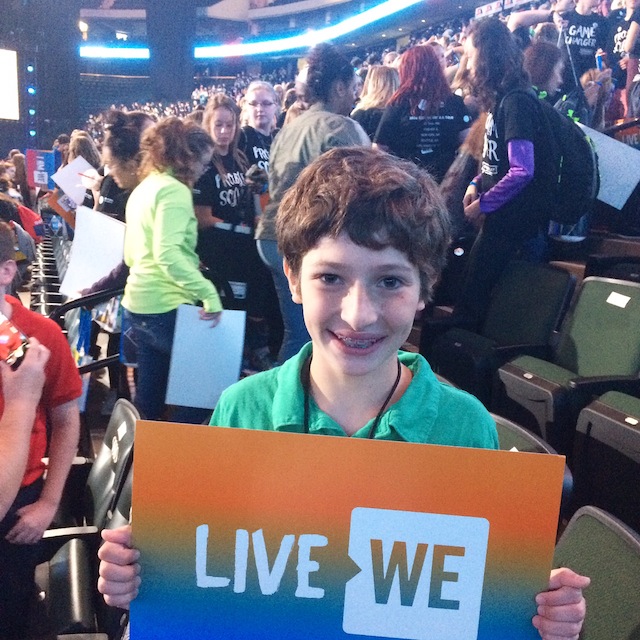 We Day is a huge celebration for young volunteers, and I was lucky enough to attend this year’s event at the Xcel Energy Center in St. Paul, Minn. They invite celebrities who are involved with charities and people who have gone out of their way to be in charitable activities. Among the highlights of the day: Astronaut Buzz Aldrin was spectacular. He proved that the sky isn’t the limit. There was a girl named Mandi Simon who was just 8 years old when she created a non-profit organization called Simon Says Give, which supplies the less fortunate with a good birthday and helps kids become leaders. George Takei, the actor best known for his role in Star Trek, gave a speech about how he overcame the atrocities he went through in World War II. The Last Maasai Warriors spoke about the importance of education (more on them in my next blog post). Girl Meets World star Sabrina Carpenter did a huge performance and so did the singer Omi. Jordan Smith, who won The Voice last year, did two amazing songs. Last, but definitely not least, Craig and Marc Kielburger, the founders of We Day, gave a speech about the whole point of We Day, which is to show kids that they can make a difference.

At a press conference, I had the chance to ask Jordan Smith one quick question. He was surprisingly shy but all of his answers were deep and meaningful.

What message are you trying to communicate with your music?
Jordan Smith: The one thing most people need to hear is that they are not alone. Everyone wants to know there is someone like them out there who understands them. I try to create music that people can relate to. Music that provokes emotion—both happy and sad—and thought. I want my songs to remind my listeners of a specific time or place or person in their life and all the emotions that come along with that memory or experience. Maybe it helps them celebrate a happy moment. Maybe it helps them make it through a sad one. Music is the medium, but the message is meant to inspire and cause the listener to feel different than before they started listening.

I also was able to get a quick interview with Craig Kielburger, who founded We Day with his older brother Marc. They started their charity when Craig was in seventh grade. Craig is living proof that one person (or two people) really can have a huge impact.

Where do you think kids can make the biggest impact?
By starting to get other kids involved. Do you know “Superwoman” Lilly Singh? Have you seen her on YouTube? You know her name, yes? Not all the adults know who she is.

It’s the same thing with Disney Stars! My mom was like, do you know who Olivia Holt is? And I was like, yes, of course I know who Olivia Holt is!
Exactly! There’s a lot of stuff kids know that not all the adults know. I think that kids have a unique ability to connect with other young people. So get one friend involved, or get 100 friends involved. If each person got one more person to volunteer, it would spread like wildfire.

But why kids? Adults can volunteer too. Why are kids so important to We Day?
When we were 12 —when I was your age—my brother and I called a charity on the phone and said we wanted to help. They only wanted our parents’ credit card. That was it. They didn’t want to talk to us, coach us, support us. That’s it. We wanted to do so much more. I believe that young people have a lot of power if we can organize really amazing ways to get involved. For example, we do something called We Scare Hunger. Kids collect food on Halloween for local food banks. They collect 7 million pounds of food! Or, we do a penny drive where kids collect change. They collect 140 million pennies! All of these things add up. You put enough young people together, they can create an enormous impact.

So you and your brother said, we’re going to start an international charity organization, and you actually did it! What made you different from other kids?
I was lucky to receive a lot of support. I had a really amazing teacher who supported what we did. The first thing I did, I spoke to my class. I said, “I need your help.” And my teacher gave me the time and the permission to speak. Imagine if she had said no. This never would have gone anywhere. We wouldn’t be in this giant stadium today! One piece of advice we give to young people: If they want to do something, others can help them. They don’t have to do it all on their own. They can go to a parent, a teacher, or they can call us. In fact, we have a team that will help coach them to do good.

Who is your favorite celebrity you’ve met, and why?
Buzz Aldrin was pretty cool. Along with Neil Armstrong. The first men to walk on the moon! How crazy is that? There are so many incredible people we’ve had on the We Day stage. Dr. Jane Goodall, from a science point of view, reshaped how we think about animals. She used to live with chimpanzees! Or, do you know Malala Yousafzai?

I love Malala! She’s amazing.
She’s been to many We Days. She’s even volunteered with us in Africa. There are a lot of amazing people who’ve made an impact.

Have you ever met a celebrity and just frozen?
I did freak out meeting Buzz Aldrin. I’m a science geek at heart, so there were so many questions. In fact, about an hour ago, he was giving me a space lesson about the dark side of the moon. I asked him this question, and I thought he’d give me like a 2 second answer, but he started getting props out and telling me about the orbital pull of the sun. He had a cup, and he had a pen, and he was flying with the pen, and I was like, oh my god, Buzz Aldrin is teaching me astronomy! It’s so so cool.

So what’s coming up next for We Day?
Glad you asked. We used to be called Free the Children, and now we’re called We. It’s a simple name but powerful promise—the idea that we can change the world. We just launched a program so kids can get involved in their class or at home. No matter who you are, we can support you. We Day is now going on television, on Hulu. The third new thing is We Pledge. If you promise to do service work, then our sponsors will give money for every person who pledges to do good.

What advice would you give to kids who want to do anything like what you’ve done?
My biggest advice, especially for a young person, is, you’re never too young to change the world.

3 thoughts on “We Day: Helping Kids Be Great”