After over a year of waiting, memorizing, and rapping, it was amazing to really see what I had been waiting for: Hamilton! I finally made it to the room where it happens, at the PrivateBank Theater in Chicago. It was really fun when the actors made a slight change because I would always catch it, since I know the songs so well. 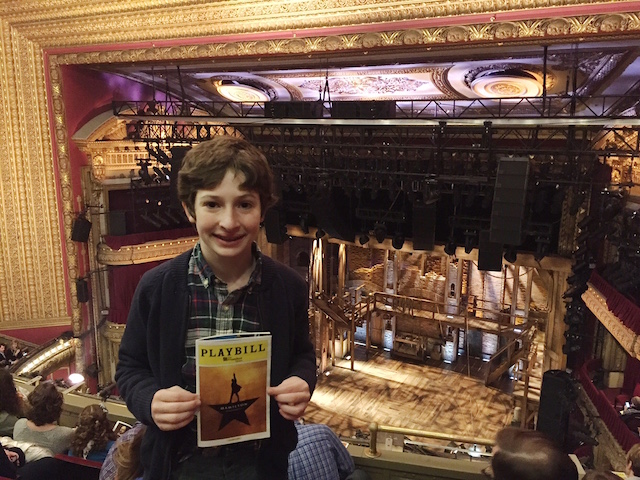 Now that I’ve seen Hamilton, I am following through on my promise. This is my review. While most Hamilton reviews talk about the songs, this review will talk about the dances. This way, you guys will hear about something that you haven’t already heard about a million times. I will only give a short summary of the best dances. At the end, I will mention some that almost made it onto the list. Just to be clear, I am not critiquing the songs. I am critiquing the dances.

Right Hand Man – In this song, there are continuous BOOM noises. On every boom, every single person on stage jumped up with perfect synchronization. Also, there was a huge flash of light to match the ultimate jump and boom.

You’ll Be Back; What Comes Next; I Know Him – There wasn’t any dancing in these three songs, but there is tons of body language. The king would always get excited at the thought of the Americans dying. Somehow, Lin-Manuel Miranda managed to make this amusing.

Satisfied – In the rewind section of this song, the was a huge circular light that continuously shrunk into the middle of the stage to look like everything was rewinding. To further the effect, everyone started to move backwards.

Yorktown (The World Turned Upside Down) – Yorktown was really that epic dance that everyone was waiting for. The cast came out and just did a huge, elaborate, powerful dance. It was flawless.

What’d I Miss – In case you don’t know, this is the song where Thomas Jefferson comes back to America from France. The actor  who plays Jefferson was extremely good with body language. There were so many jokes that you would never know from the soundtrack simply because you can’t hear them. By the time this song was over, I could feel the energy coursing through the room.

Cabinet Battle #1; Cabinet Battle #2 – Just like What’d I Miss, the Cabinet Battles were filled with visual jokes. For example, after Jefferson finished his rap, he dropped the mic. When Madison picked it up, he immediately started fanning it.

The Room Where It Happens – This is the song where everything turns around. Burr realizes that he is going to have to really start jumping on opportunities if he wants to defeat Hamilton. Everything about this song was perfect. It was easy to feel Burr’s anger.

The Adams Administration – The part that stuck with me here was the tech. and lighting. It made it noticeably more dramatic. The second that Hamilton called Adams a “fat, mother, BLEEPer,” the entire stage turned red.

Hurricane – In this song, everyone moved in slow motion around the middle of the stage, the eye of the hurricane. Hamilton stood unmoving in the dead center of the stage. Also, the lighting effectively made it look like it was under water, or in a hurricane.

Blow Us All Away – Here, they really just gave a visual version of the song. It wasn’t really that it was a spectacular dance, or an epic song, or brilliant tech., it just gave me a better idea of what really happened in that scene.

The World Was Wide Enough – This is a powerful song even without the dance. While Hamilton and Burr stood there as the bullet came, the rest of the cast was in amazing gymnastic positions around them. Also, if you look closely, you can see that the woman representing the bullet slowly moves from Burr towards Hamilton.

Here are the songs that have earned my honorable mention:
Alexander Hamilton
My Shot
The Schuyler Sisters
Farmer Refuted
Ten Duel Commandments
Guns and Ships
Say No to This
The Election of 1800
Who Lives, Who Dies, Who Tells Your Story

I’m so lucky that I got my shot to see Hamilton. Even if you can’t get tickets, the songs really tell the whole story, so I highly recommend listening to the entire soundtrack, straight through. It makes history feel relatable and modern. Everything about it is great.

More Hamilton? I talked to Dessa about her song on the Hamilton Mixtape.